What my car should look like when finished - Stoneleigh 2015

I finally got around to installing the oil catch cans.  I couldn't really decide where I wanted to fit these, but ended up fitting them just above the alternator on the passenger side.  Care will have to be taken when draining them down not to spill any of the collected oil...

I made a stainless bush and bracket to mount these to the cylinder head, also using the supplied twin bracket.  I used AN-6 fittings and hose to connect it all together.  Once mounted, and by following a diagram detailing the "dirty" side and "clean" sides, I ran the hose as neatly as I could, cut it to length and fitted the ends.  The only difference between my LS7 and the diagram is that the driver's side rocker cover only has 1 vent point so I used a T-piece to join to the passenger's side rocker cover.  I just have a few more clips to fit to ensure the hose doesn't move. 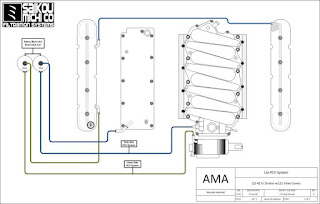 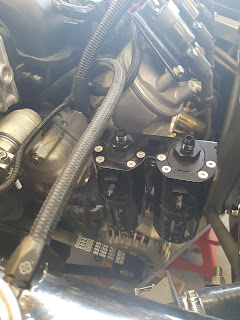 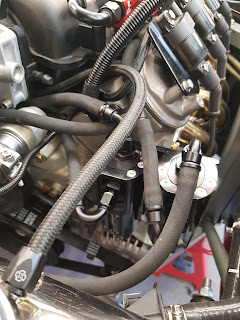 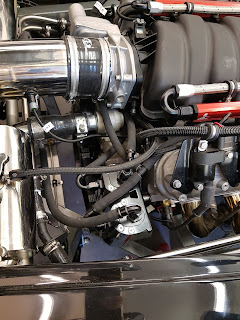 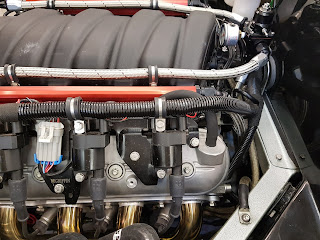 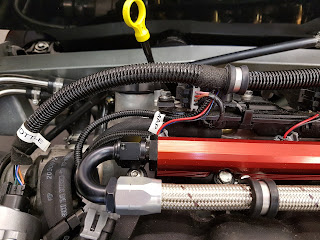 Posted by Jonathan Goodlad at 10:13 No comments:

It seems like I haven't had much time in the garage over the last few months, what with school holidays, trying to be out and about while the weather is still good and other activities.  I have however managed some time so will try and provide an update as to what I have done.

I started working on the power steering column again.  I thought I'd be best to get the polished stainless cover to fit along with the stainless steel stalks.

The Corsa steering column took a bit to modify to allow the GD supplied stainless cover to fit.  Some of the plastic had to be cut off - this was done using a multi tool.  I trimmed just enough so that the cover would fit.  Interestingly, the bolt holes line up perfectly, which must be the same as the GD supplied Vectra column.

Since I am not using a key, I removed the ignition barrel, and also the steering lock mechanism.  I am using the CANEMS immobiliser and also a Battery Brain which has a battery cut off controlled with a remote.  I think that this covers the requirements of the IVA for disabling the car so I don't need the steering lock....

Since my Corsa column is adjustable, I had to trim the adjuster lever, and thread it to allow fitment of the GD supplied end.  This also meant that I had to modify the underside of the stainless cover to allow the lever to move.  The edges have been smoothed over with a file.  I also made an aluminium blank to cover the key hole in the aluminium cover, so it won't indent when covered with the leather.

I bought new indicator and wiper stalks for a Vectra B, since the Corsa ones are for a CANBUS system.  The Vectra B ones fit exactly into the Corsa column.  I cut the plastic stalks off, tapped out the holes to M6, and fitted the GD supplied stainless stalks.  I plan to use the wiring plug off the Vectra to plug into the new stalks, I just have to order new terminals to crimp onto the GD wiring.

When I had the steering column temporarily in the car, I marked and tack welded the Corsa universal joint to the GD supplied steering column assembly.  This has new been fully welded and tested to ensure that it won't fail during operation.

The next thing to do is to make the GD supplied aluminium steering wheel boss fit the Corsa column.  Typically, this is greatly different from the Vectra column.  The Corsa column has a bigger diameter spline, so the boss will require machining out, and new splines cut.  I will provide an update once this has been done.  I will be using the Corsa steering wheel for now..... 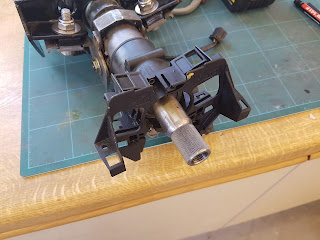 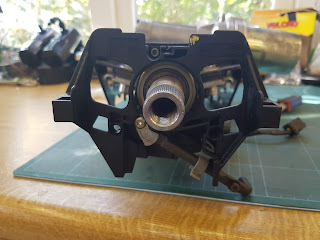 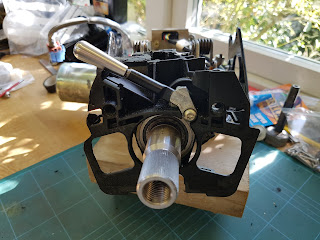 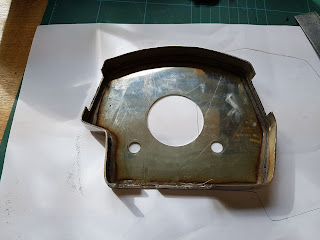 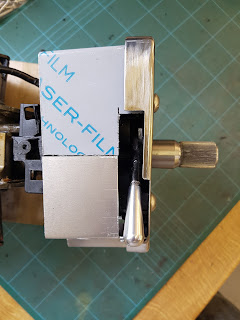 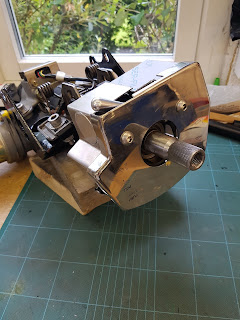 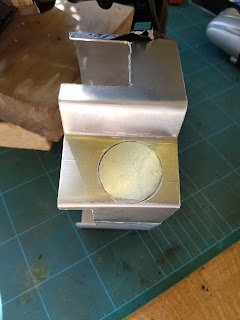 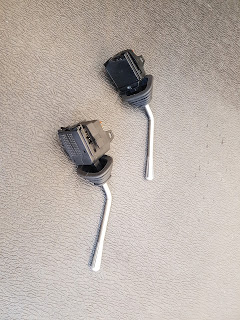 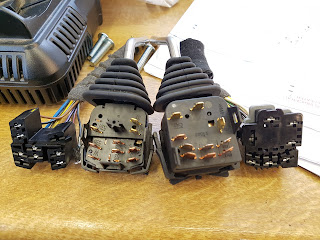 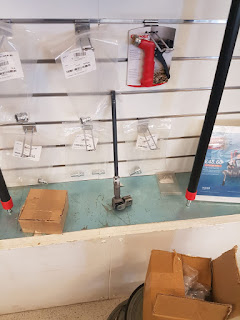 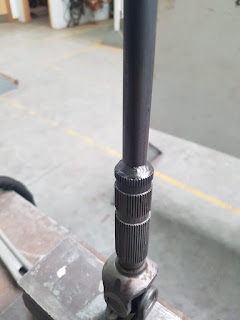 Posted by Jonathan Goodlad at 10:05 No comments:

I took time to fit the reverse light and fog light using the GD supplied stainless stand-offs.  At this moment in time, I am thinking to keep these on permanently since I know some people prefer them off.  I'll see what happens.

The body was drilled and long stainless set screws were used to mount the lights to the car.

I then finished off the wiring for all the rear lights using 5-way super seal connectors. 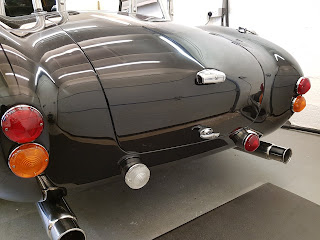 Posted by Jonathan Goodlad at 17:48 No comments:

Email ThisBlogThis!Share to TwitterShare to FacebookShare to Pinterest
Labels: Lights

Since my car was looking so good, although not quite finished, I decided to put her to the local car show in Lerwick - Shetland Classic Motor Show.  I put her in the trailer, strapped her down and headed to the show.  I received very positive feedback from those I spoke to which is a reflection of GD's build quality.  Some photos of the very successful show can be found on Gordon Siegel's Facebook page here.

The car show is every 2 years and so hope to drive her there next time! 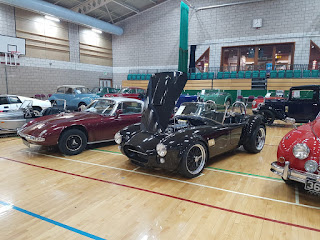 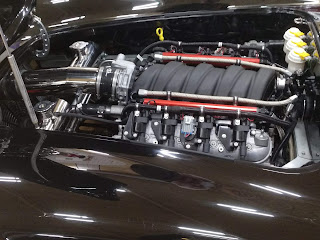 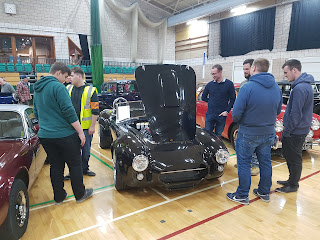 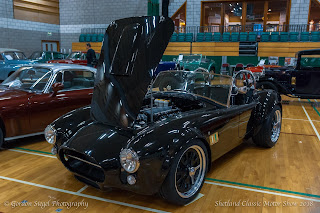 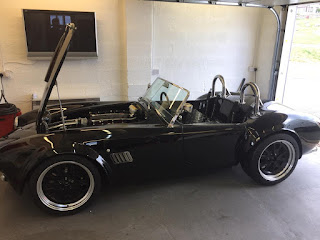 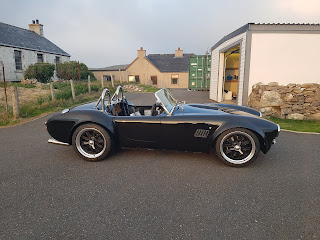 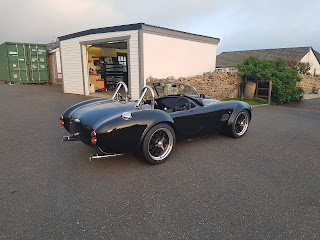 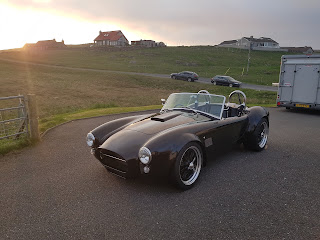 Email ThisBlogThis!Share to TwitterShare to FacebookShare to Pinterest
Labels: Wheels

GD supply AP Racing front discs and callipers as an upgrade.  They are 330mm x 28mm grooved discs and 4-pot aluminium callipers.  I assembled the disc to the bell using the bolt kit and fitted the callipers to the supplied aluminium blocks.  The stainless flexible hoses were also connected and fitted to the wishbones using stainless P-Clips. 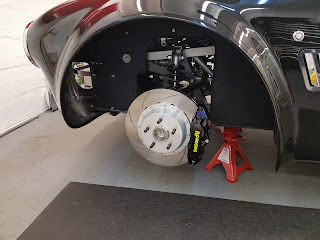 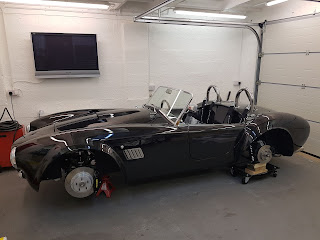 Posted by Jonathan Goodlad at 17:46 No comments:

Email ThisBlogThis!Share to TwitterShare to FacebookShare to Pinterest
Labels: Brake

GD supply fishtail windscreen vents which I found were quite big and used up a lot of space in behind the dash.  I decided to manufacture my own to minimise space taken up.

I made a cardboard template and passed this to a friend who converted it into stainless steel.  By using this design means the hoses are well out of the way and allows plenty of room for the wiring and possible glovebox.  I polished the stainless escutcheons before bolting them to these vents using polished button head set screws. 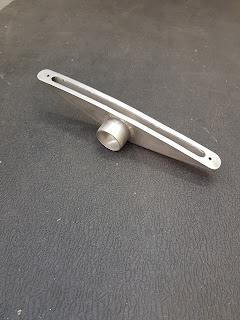 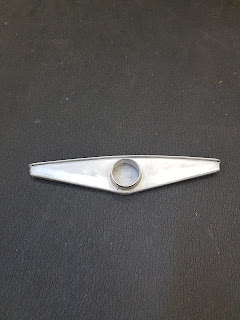